IRJ at InnoTrans 2014: Solaris, Poland, is exhibiting one of 18 Tramino low-floor LRVs for Braunschweig Transport (BSVAG) at InnoTrans this week. 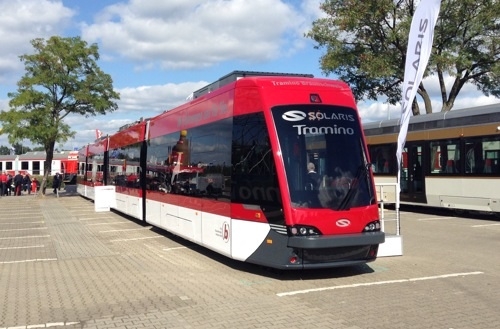 The 35.7m-long four-section vehicles will operate on the German city's unique 1100mm-gauge tram network and accommodate up to 211 passengers, 87 of them seated.

The vehicles are fitted with Vossloh Kiepe electrical equipment and 0.75kW capacitors, which store energy from the regenerative braking system for re-use by the traction system during acceleration.

So far Solaris has delivered three vehicles to Braunschweig and the final vehicle is due for delivery in May 2015.

Braunschweig is the fourth city to order the Tramino and the second in Germany after Jena, which operates a fleet of five vehicles.

Solaris says it is currently bidding for LRV contracts in Germany and central and Eastern Europe, but it is also looking further afield to emerging markets such as the Middle East for further orders.