Britain’s train fleet could double in size by 2045 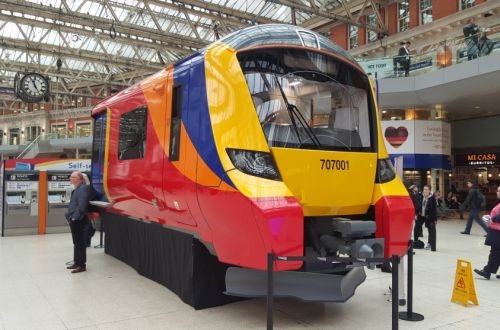 A mock-up of a Siemens Desiro EMU for South West Trains unveiled at London Waterloo on March 23.

The total number of new coaches committed for delivery in the five-year "control period" (CP) from April 2014 (CP5) and in the early years of CP6 (2019-2024) is now more than 4500 representing an investment of more than £7.5bn, with around half of the vehicles being built in Britain. The influx of new vehicles will reduce the average age of the national fleet from 21 to 16 years.

The re-scheduling of Network Rail's electrification programme means the forecast for CP6 will now be lower than for CP5, following completion of the very large orders for the Thameslink, Crossrail and IEP projects. There will also be an increase in the number of new diesel and bi-mode vehicles being purchased.

A PDF copy of the report is available by clicking here.