A British project to evaluate the performance of battery-powered rolling stock reached a milestone on January 12, when a specially-adapted Bombardier 25kV 50Hz ac class 379 Electrostar EMU operated under battery power for the first time in passenger service. 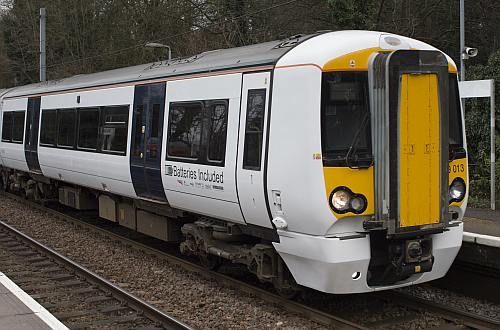 The four-car train has been equipped with six battery rafts, each comprising a battery box, isolation switch, power distribution control panel, battery charging inverter, batteries and battery mounting system. Initially the train will use lithium iron magnesium phosphate batteries although other battery technologies such as hot sodium nickel salt will also be evaluated.

IPEMU is a joint initiative between Bombardier, operator Abellio Greater Anglia, infrastructure manager Network Rail, the FutureRailway project, and the Rail Executive of the Department for Transport (DfT), which is funding the project.

Initial dynamic testing was carried out on the test track at the Bombardier facility in Derby, before moving to the Old Daly test facility near Nottingham.

"We've made terrific progress with this project so far and seeing the battery-powered train in timetabled service is a huge step forward," says Network Rail principal engineer Mr James Ambrose. "After months of engineering and testing, the train is running just as we would like it."

Network Rail says it believes battery power could be used to bridge short gaps in the electrified network, and enable through running of electric trains onto non-electrified branch lines where it would not be cost effective to install catenary.