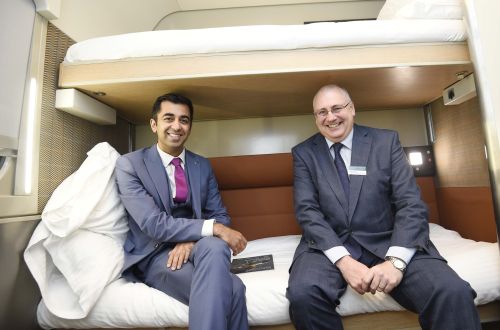 Humza Yousaf and Peter Strachan in one of the twin berths.

CAF, Spain, is building a fleet of 75 Mk 5 coaches of five different types under a £150m contract awarded by Serco Caledonian Sleepers in February 2015. The vehicles will be formed into four sets of 16 coaches with 11 spare vehicles and will enter service in 2018 on overnight services from London to Glasgow, Edinburgh, Fort William, Inverness, and Aberdeen.

The new trains will have compartments with double beds, and some compartments will have en-suite toilets and showers for the first time in Britain. The lounge/dining car will have several seating options and space for passengers to socialise. Other innovations include a hotel-style key card entry system, more accessible compartments, reclining seats, upgraded panels for phone and gadget charging, and passenger Wi-Fi.

Peter Strachan and Humza Yousaf try out the lounge car.