THE government of Luxembourg has given Luxembourg Railways (CFL) the go-ahead to order 11 additional Kiss double-deck EMUs from Stadler. 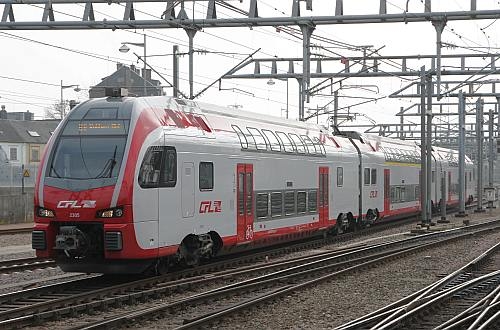 Six of the dual-voltage (15kV/25kV ac) trains will be used for domestic services in Luxembourg to cope with growing ridership, which is increasing by around 5% per year.

The remaining five units will be used for new services from Luxembourg to Germany from December 2018. These services will run along the west bank of the river Mosel, avoiding Trier Main Station but serving the western suburbs of the German city.

This 15.6km electrified line is being reopened with five new stations at a cost of around €20m, with funding coming from the state government of Rhineland-Palatinate. From 2018 half-hourly stopping services are planned with a Wittlich (Germany) - Dommeldange (Luxembourg) service sharing the route with a Saarburg - Trier West service. The operation of the German section of the Wittlich - Dommeldange service is currently being tendered on the basis that CFL Kiss EMUs will be used to operate the service.

CFL acquired eight three-car Kiss EMUs to operate new hourly services to Luxembourg to Koblenz, which were launched last December. These trains run via Trier Main Station, where a five-car DB Regio Flirt 3 EMU is attached for the remainder of the journey to Koblenz.