CSR tops the rolling stock league - but can it stay there?

A CHINESE manufacturer has topped the league table of the world's rolling stock manufacturers for the first time, according to a new study of the industry, which reveals CSR Corporation leapfrogged Bombardier to become the largest supplier by turnover in 2010. 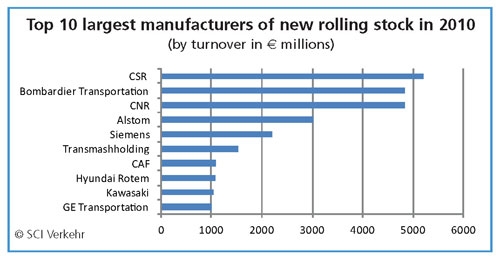 The annual study of 60 suppliers by SCI Verkehr, Germany entitled Worldwide Rolling Stock Manufacturers and Production Sites, reveals CSR's Chinese counterpart CNR rose from fourth position in 2009 to third in 2010, while Bombardier slipped from first to second and Alstom from second to fourth.

SCI Verkehr notes that both CNR and CSR operate in a politically-controlled domestic market with very large-scale investment, which helped them to almost triple their turnover between 2006 and 2010. However it questions whether the two suppliers can maintain this momentum as domestic demand declines and the need to secure contracts abroad increases.

CAF has shown the strongest growth among European manufacturers, climbing from eighth to sixth position as it continued to move into new markets. The study also suggests Stadler may soon enter the top 10.

According to SCI Verkehr, the 60 manufacturers and their 200 production sites share more than 90% of the global rolling stock market. In total, 170 companies are active in the sector with 330 sites.