DANISH State Railways (DSB) announced on December 15 that it will phase out the fleet of AnsaldoBreda IC4 trains in 2024 as electrification enables the introduction of new EMUs to replace the troubled DMUs. 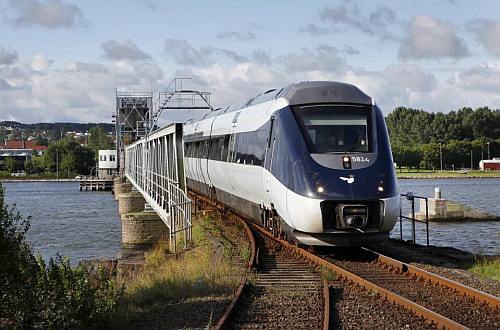 DSB ordered 82 four-car IC4 and 23 IC2 two-car sets from the Italian manufacturer in 2000 and the first trains were due to enter service in 2003, but the trains have been beset by technical problems and introduction has been heavily delayed.

DSB has submitted an evaluation entitled Passenger Traffic in Denmark 2016-2024 to the Parliamentary Transport Committee, which sets out options for the number of trains that will be commissioned for revenue service “in light of further experience.”

“The plan for the IC4 trains is a direct extension of DSB’s announcement earlier this year that IC4s will not form the backbone of the national fleet,” says DSB CEO Mr Flemming Jensen. “Since the publication of the external consultant’s report on IC4 in December 2014, DSB has worked hard to implement the recommended improvements to the trains to achieve our objectives. However, the figures from the ongoing status reports speak for themselves. It is against this background that DSB has reached its conclusions in our feedback to the Parliamentary Transport Committee.”

DSB says it will not be possible to obtain suitable replacement diesel trains for use in the period until 2024 and the IC4s will therefore remain in service under a “minimal deployment plan.” DSB says that it will continue to focus on minimising faults to ensure sufficient trains are available to cover the timetable. Further work will be carried out to improve passenger comfort and ensure the trains can operate reliably when working in multiple.

DSB estimates that with a “focussed effort” it can increase the number of trains in service daily from 30-32 sets to around 40 trains. This will be achieved by expanding workshop capacity by 30% with an increased number of maintenance staff on hand. The total number of trains available for passenger operation will be increased to 77.

Despite the increased focus on reliability, DSB warns that there could still be “many faults that result in delays,” and that new and unknown faults could still be discovered. To guard against any further deterioration in availability, DSB is budgeting for the purchase of additional rolling stock and could increase its forthcoming order for 26 electric locomotives, which includes an option for additional units valid until 2019.

"DSB has a strong and realistic plan to meet passenger demand as it moves towards the purchase of electric trains,” says Jansen. “At the same time we can see an end date for IC4 on the horizon and thus bring to an end an unhappy chapter in DSB's history.”