GERMAN Rail's (DB) next-generation long-distance train the ICx made its first appearance on the German mainline network at the end of December, when the first ICx set was hauled from Bombardier's Henningsdorf plant near Berlin to Siemens' Wildenrath test centre in North Rhine Westphalia. 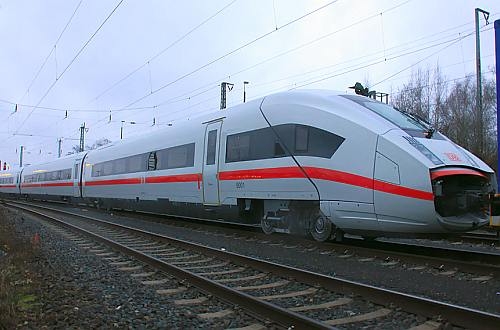 DB signed a framework contract with Siemens in May 2011 for up to 300 ICx trains, placing an initial firm order for 130 sets, with an additional 90 trains planned and an option for a further 80 trains, which can be exercised at any time until 2030. In 2013 DB revised the specification for the fleet with an improved interior and increasing the 10-car trains to 12 vehicles.

The first batch of 230km/h trains comprises 85 12-car and 45 seven-car sets, which will replace locomotive-hauled trains. Limited trial operation with passengers is expected to begin in mid-2016 with full service introduction of the 12-car trains scheduled for December 2017. The seven-car trains are due to enter service from 2020 onwards.

DB plans to order a 250km/h variant which will replace the ICE 1 and ICE 2 fleets.

To aid production, Bombardier is producing bodyshells and trailer bogies, and is also carrying out final assembly of driving cars and two intermediate vehicles for each set under a €336m contract awarded by Siemens in April 2013.