THE first of 70 class 385 regional EMUs for ScotRail was delivered to the VUZ Velim test track in the Czech Republic on August 26 after completing its journey from Hitachi’s Kasado plant in Japan. 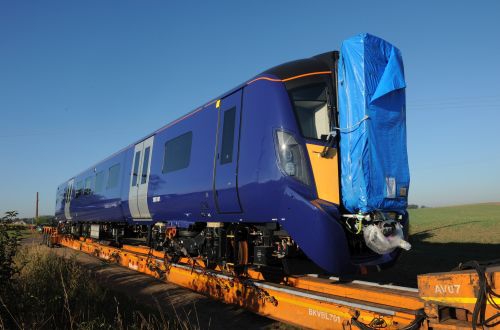 Set no. 385101 - the first of 24 four-car trains - will undergo system and combined testing at Velim until early next year. A second four-car train is due to be delivered to Britain next month. Initial testing on the British network will take place in a signal protected zone.

The £370m order comprises 46 three-car and 24 four-car trains, which are based on Hitachi's AT200 platform. The 25kV 50Hz ac 160km/h trains will be formed of 23m-long vehicles and equipped cab-end gangways for multiple operation.

Seven of the trains are being built at Kasado, where fabrication of bodyshells began last October, while the remaining 63 sets will be assembled at the company's new British facility at Newton Aycliffe in northeast England.

The first trains are due to enter service on the Edinburgh - Falkirk High - Glasgow Queen Street line from autumn 2017.