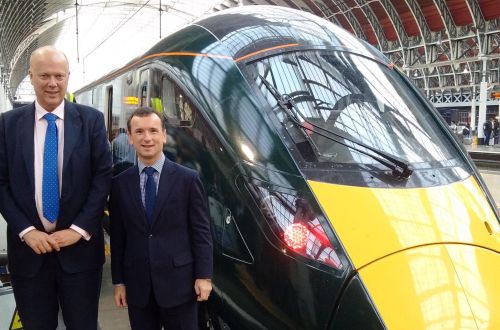 Unfortunately, the inaugural run from Bristol Temple Meads to London Paddington was marred by teething problems with the train, which delayed its departure from 06.00 to 06.25. The train was delayed further en route and arrived at Paddington 41 minutes late. Passengers in one coach were also subjected to water pouring from the air-conditioning equipment in the ceiling.

"I am very sorry and disappointed that today’s first passenger train from Bristol encountered technical issues, causing a delay to the service and an air-conditioning issue which resulted in water entering the carriage rather than being discharged externally," says Ms Karen Boswell, Hitachi Rail Europe’s managing director, who was on-board the first service. "This was not to a standard that Hitachi expects and is known for. We can and will do better. Our depot teams are as a matter of priority investigating the root causes of today’s technical issues, and we will ensure that these are corrected as quickly as possible." Boswell issued an apology to passengers on Twitter.

With the electrification of the GWML suffering significant delays, the DfT revised the specification for the Great Western IEP fleet in 2016 and all of the electric trains are now being supplied as bi-mode class 800 sets. Most of the trains are being assembled at Hitachi’s Newton Aycliffe plant in northeast England.

At present the trains are only able to run under electric traction on the first 39km section of the GWML between London Paddington and Maidenhead. Network Rail says IEP trains will be able to run electrically on the next section between Maidenhead, Reading and Didcot (46.7km) by January 2018, with completion of electrification of the GWML as currently authorised to Bristol Parkway and Cardiff, and from Reading to Newbury scheduled for December 2018.