THE first of 13 five-car rakes of Mark 5A coaches, which CAF is building for British franchisee Trans-Pennine Express (TPE), is on its way from Spain to the Velim test track in the Czech Republic. 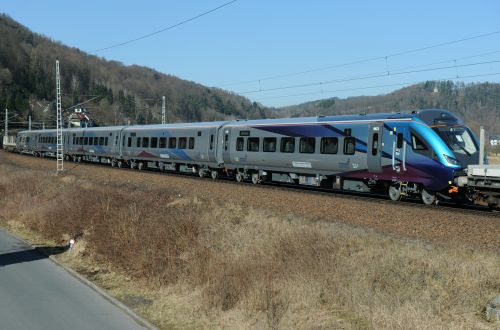 The push-pull coaches be will powered by class 68 locomotives leased to TPE by Direct Rail Services. Both the locomotives and coaches will be owned by Beacon Rail Leasing. Two of the locomotives will also be sent from Britain to Velim to power the trains on the test track.

The new trains will enter service on the Liverpool - Manchester - Leeds - Newcastle route where they will replace three-car class 185 DMUs. However, Hitachi is building 19 five-car class 802 bi-mode trains for this route, so the CAF trains will be redeployed on Liverpool - Scarborough and Manchester Airport - Middlesbrough services, when the Hitachi trains enter service in 2019.

The Mk 5A coaches will have an electronic reservation system, Wi-Fi, power sockets, a real-time passenger information system, and an onboard server to enable passengers to stream programmes.