WEST Midlands Trains, Britain, has signed an agreement with Vivarail to supply three of its class 230 D-Trains for operation on the Bletchley - Bedford Marston Vale Line by the end of this year. 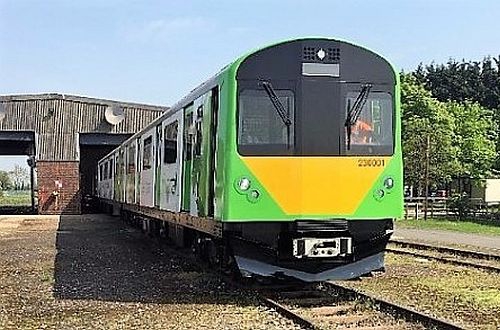 This would be the first commercial operation of D-Trains which are former London Underground D78 District Line trains rebuilt and converted to diesel traction or battery power for operation on the mainline network. The only major components of the D78 to be retained in the D-Train are the aluminium bodyshells, bogies, traction motors and rheostatic braking system.

West Midlands Trains says one of the advantages of using D-Trains rather than conventional DMUs is that they will be maintained locally at Bletchley rather than at Tyseley depot in Birmingham.

Vivarail was formed in 2012 by Mr Adrian Shooter, formerly chairman of Chiltern Railways, to produce the D-Train for regional routes. Vivarail is based at a rail-connected site at Long Marston in central England with full manufacturing facilities and a 3km test track.

“This is a big day for Vivarail,” Shooter says. “We have invested considerable time and money to bring our innovative D-Train to this point and we are delighted to be working with West Midlands Trains to introduce them into passenger service.”

D-Trains are designed to accept diesel, battery or, in the future, hydrogen fuel cell power modules. Vivarail says it will introduce its first production battery vehicle this spring, which be fully approved and ready for passenger service.