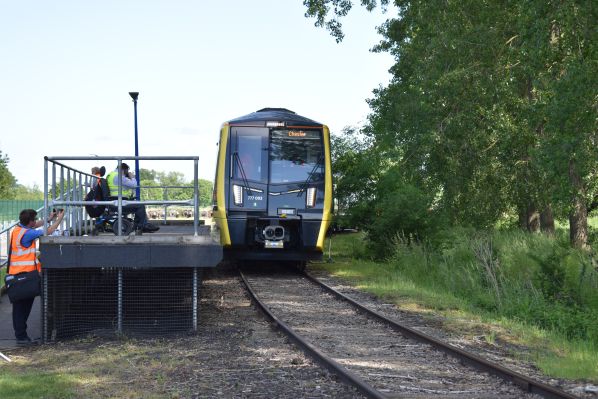 TESTING of Stadler class 777 independently powered electric multiple units (IPEMU) for Merseyrail has been completed after one month in Britain.

Merseytravel, which manages the Merseyrail concession, has 53 four-car EMUs on order from the Swiss manufacturer. However, two are also fitted with batteries with the aim of using them beyond the electrified network.

Procured by Liverpool City Region in 2016, the order has been increased from 52 to 53 to allow the battery testing to take place. It is hoped that the trains will serve a planned new station at Headbolt Lane, around 1.5km from Kirkby which could open in 2023

Speaking to IRJ aboard 777002, which became the first class 777 to carry British passengers when it provided demonstrations of its battery capability at the Rail Live exhibition at Long Marston on June 16-17, Powells explained that the ambition remains to expand the Merseyrail network, which could end up requiring 60 additional trains from Stadler, taking the order to 113. The option for the extra trains expires in 2028.

The trains have yet to enter revenue service, although Powells says training and testing is underway. They are due in service from this year.

For detailed data on fleet orders from Britain and around the world, subscribe to IRJ Pro.