Škoda double-deck train for DB on test at Velim

THE introduction of Škoda trains on DB Regio Oberbayern’s Munich - Nuremberg Express high-speed regional services moved a step closer on January 21, when a class 102 locomotive began testing with a set of double-deck coaches at the VUZ Velim test track in the Czech Republic. 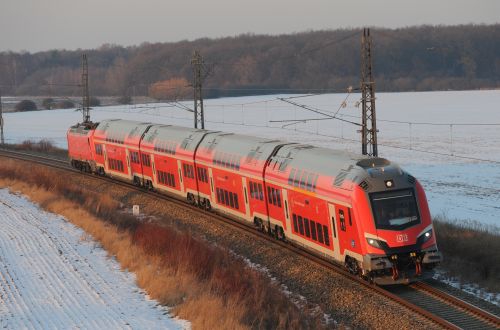 DB Regio placed an order with Škoda Transportation in June 2013 for six of the 15kV 16.7Hz ac 6.4MW locomotives (Škoda type 109E3) and six six-car sets of double-deck coaches, which will operate at up to 200km/h on the Nuremberg - Ingolstadt high-speed line.

Initially the first test train is operating in four-car formation on both the large and small circuits at Velim. On the large circuit the train has already reached its maximum operating speed both with the locomotive and driving trailer leading.