THE Hungarian government has approved the purchase by MÁV-Start, Hungary's national passenger operator, of six EMUs with an option for 15 more units. 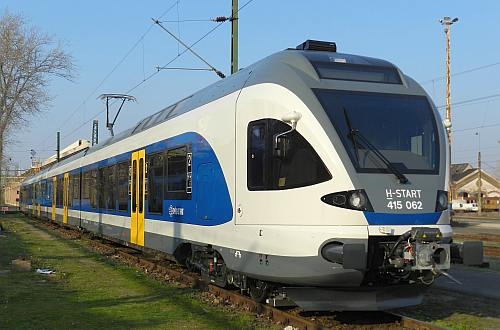 The new trains must be able to couple with MAV-Start's existing class 415 fleet.

The new EMUs will replace locomotive-hauled trains and strengthen the fleet in line with electrification of the last remaining diesel routes serving Budapest.

During the last decade, MÁV-Start has purchased 10 Bombardier Talent EMUs and 102 Stadler Flirt EMUs, the last 30 of which are still being delivered, and is increasingly using its multiple unit fleet on suburban services. Exercising the option for the additional 15 EMUs would expand the modern suburban EMU fleet by around 20%.

Meanwhile, in a separate project, 21 older EMUs which have only one powered car are to be refurbished and transferred to rural depots to replace short locomotive-hauled trains on stopping services between major towns.