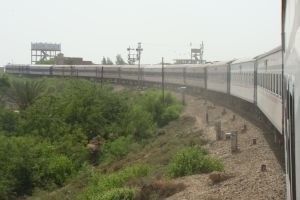 Bilour says that the new coaches are a major part of efforts to reinvigorate Pakistan Railway (PR), adding that every effort will be made by PR staff to operate the 18h 25min service on time. The 16-car trains carry up to 729 passengers in economy class and 216 passengers in air-conditioned class.
Pakistan's railway network has deteriorated rapidly in recent years following minimal investment in infrastructure and rolling stock maintenance. Bilour told the Pakistan parliament on February 8 that 287 of its locomotives are currently out of service awaiting repair while more than 500 have been deemed uneconomic to repair and will need to be replaced.
PR subsequently agreed a deal in late February with its subsidiary Pakistan Railway Advisory & Consultancy Services (Pracs) to conduct a reported Rs 6.4bn ($US 70.5m) revamp of 96 locomotives with work due to be completed by the end of the year.
However, another agreement reached between PR and National Logistics Cell (NLC) to repair 30 out-of-service locomotives has been criticised by some members of Pakistan's National Assembly due to corruption allegations surrounding NLC.
Under the terms of the agreement, NLC would use 15 of the locomotives for its own freight services while returning 15 to PR. Bilour said that it is a good deal for PR because the charges made by the NLC for repairs would be recuperated by access charges it will pay for operating freight services on the network.
After two failed attempts, bids are due by April 26 for the supply of 150 new locomotives. PR cancelled the previous tenders after the high court found that the previous tendering process favoured suppliers from the United States.
Categories: Asia, Fleet, Locomotives, News, Rolling stock
Tags: CNR, Pakistan, Pakistan Railways PR