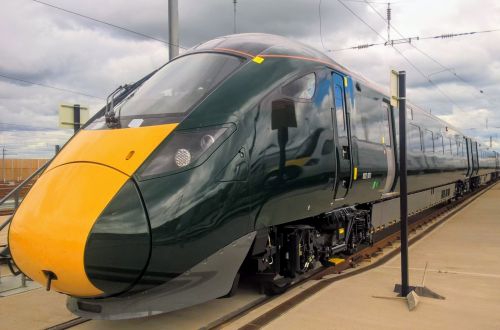 The fleet of 36 bi-mode class 802s will be used on GWR services from London to Exeter, Paignton, Plymouth and Penzance, replacing diesel High Speed Trains (HSTs) dating from the late 1970s.

Testing of the trains on the GWR network began on August 8 with a run between Bruton and Cogload Junction near Taunton in Somerset.

Three five-car class 802s built at Hitachi’s Kasado plant in Japan are currently in Britain. Sets T1 and T2 have both been delivered to Stoke Gifford depot in Bristol for testing in southwest England, while set T3 is at Doncaster and undergoing tests on the East Coast Main Line.

The remainder of the fleet will be built at Hitachi Rail Italy’s Pistoia plant, where the first two trains are nearing completion. The first Italian-built train is due to arrive in Britain before the end of the year and the 32 remaining sets will be delivered by December 2018.

Full fleet introduction will take place between January and March 2019, with HST operation of services from London to southwest England ending early in March 2019.