NETHERLANDS Railways (NS) has unveiled a mock-up of its Intercity New Generation (ICNG) EMU, 79 of which were ordered from Alstom in 2016. 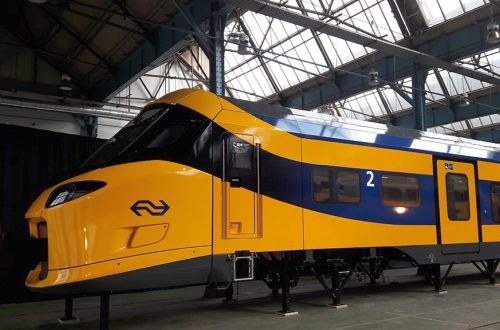 The 200km/h trains are due to be introduced in 2021, initially on Amsterdam - Rotterdam - Breda services via HSL South, operating under 25kV ac electrification on the high-speed line and the standard Dutch 1.5kV dc system on the conventional network.

The train is based on Alstom’s new Coradia Stream platform and the order comprises 49 five-car and 30 eight-car sets, with options for up to 150 additional trains, including multi-system sets for Amsterdam - Brussels services.

The ICNG sets will be equipped with ETCS Level 2 with a specific transition module (STM) for the ATB train control system used on the Dutch conventional network.

The train will be compliant with TSI- PRM (Passengers with Reduced Mobility) and there will be retractable flaps below the doors to bridge the gap between the train and the platform at stations.

The interior is still under development and groups of up to 25 potential passengers are being invited to test various interior configurations.

NS plans to split the interior into various ‘zones’ configured for working, relaxing (quiet zone) and meeting/socialising. This concept has successfully been applied to other rolling stock types, such as the DDZ double-deck trains.

Alstom has been working with a Dutch artist on the design and this could result in similar interior decoration to the new Stadler Flirt EMUs, which have been adorned with themes by the Dutch abstract painter Piet Mondriaan.

Sustainability will be a key consideration in the design: on-board waste management will separate various types of waste for recycling. An Intelligent Light Control system will automatically adjust the LED lighting according to the level of natural light, creating a more pleasant ambience and saving energy.

Other onboard features will include passenger Wi-Fi, power and USB sockets in both first and second class, and extra space for luggage.

Alstom will deliver a pre-series batch of five prototype trains next year, two of which will be equipped for operation in Belgium. They will also be used to train NS Staff.

Delivery of series trains will take place between 2021 and 2023. The introduction of the ICNG fleet will enable NS to withdraw its ageing ICMm three and four-car EMUs and ICRm coaches.