TRENITALIA marked the introduction of Pesa ATR 220 Swing DMUs on regional lines in central Tuscany on July 13, when one of the new trains was formally presented to Tuscany's regional councillor for infrastructure and transport Mr Vincenzo Ceccarelli and the mayor of Siena Mr Bruno Valentini by Trenitalia CEO Mr Vincenzo Soprano. 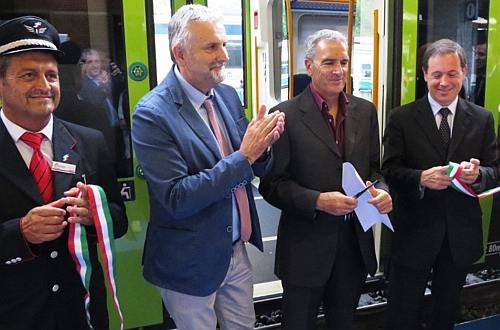 The 130km/h trains will be used on services radiating from Florence to Empoli, Florence, Grosseto and Chiusi, replacing Fiat ALN 663/668 DMUs built between 1983 and 1993. Each55m-long three-car set will seat up to 161 passengers with two wheelchair spaces.

Pesa is supplying 13 ATR 220s for non-electrified lines in Tuscany as part of a €139.6m order for 40 trains placed by Trenitalia in 2013. The first trains entered service on the Pisa – Lucca – Aulla line earlier this year and the final three sets for Tuscany are due to be delivered next month. Eleven of the trains were funded by the regional government, while the remaining two are owned by Trenitalia.