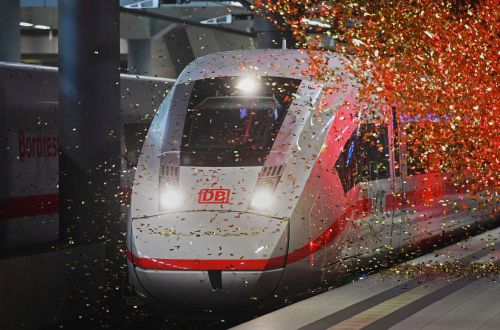 DB signed a framework contract with Siemens in May 2011 for up to 300 of the 250km/h trains placing an initial firm order for 130 sets (85 10-car and 45 seven-car), with an additional 90 trains planned and an option for a further 80 trains, which can be exercised at any time until 2030. In 2013 DB revised the specification for the fleet with an improved interior and increased the 10-car trains to 12 vehicles. If all options are exercised the total value of the order could reach €5bn.

Each 346m-long distributed-traction train includes six powered vehicles providing a total output of 9.9MW and seats 830 passengers including 625 in second class and 205 in first class. The 15kV ac sets are equipped with ETCS in addition to the standard German LZB and PZB signalling systems.

The modular design of the ICE 4 enables the train to be supplied in formations ranging from five to 12 cars. The trains are equipped with Siemens Rail Automation's Sibas PN control system, which comprises full train and individual car networks based on a 100Mbit/s switched ethernet connection. Each vehicle has its own computer, which only controls subsystems in one car. DB says this flexible architecture means it is easy to add and remove vehicles from a train.

Bogies were supplied by Bombardier and are equipped with internal frames and bearings, contributing to a significant weight saving. At 740 tonnes a 12-car ICE 4 is 120 tonnes lighter than an ICE 1 set, which is formed of two power cars and 12 trailers, but seats 87 more passengers. According to DB, energy consumption per seat has been reduced by 22% compared with a modernised ICE 1.

The ICE 4 features a real-time passenger information system and improved air-conditioning, which is designed to operate in ambient temperatures of up to 45oC. A parent-and-child compartment is provided for families and the train accommodates up to eight bicycles and four wheelchairs, with height-adjustable tables in the wheelchair areas. Two onboard hoists ensure passengers with wheelchairs can board and alight at any station.

The interior lighting system adjusts its settings automatically according to the time of day and seat numbers and reservation displays are now integrated into the seat headrest. The train has large panoramic windows to improve natural lighting. The restaurant is equipped with a curved open bar area and seats 22 passengers.

The new trains are equipped with wireless MultiProvider technology, which accesses the fastest data networks (LTE, 3G) while the train is in motion and combines the resources of different network operators, enabling higher volumes of data to be processed. DB says this will give passengers a faster and more stable wireless connection.

A pre-series train has already completed more than 250,000km of test running and in the introductory phase, which begins this autumn, two ICE 4 sets will see occasional use on the Hamburg - Hannover - Nuremberg - Munich route. The process of training of around 700 DB employees inluding drivers and mainteance staff began last month in preparation for the full introduction of the fleet from December 2017.

The trains will initially be deployed on ICE lines 22 (Hamburg - Frankfurt - Stuttgart) and 25 (Hamburg - Würzburg - Munich).