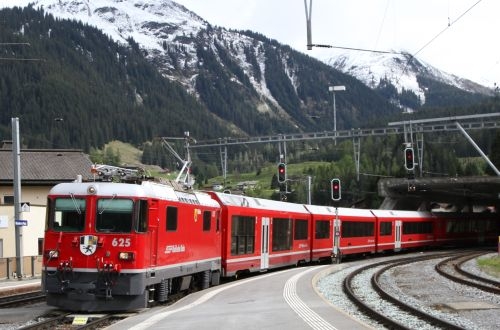 One of the new sets of AGZ coaches arrives at Klosters Dorf.

The AGZ coaches, which were ordered from Stadler in December 2010 under a SFr 110m ($US 111m) contract, are designed for push-pull operation with existing RhB electric locomotives on the 89km Chur - St Moritz line.

The coaches were originally scheduled for delivery in 2013 but this was delayed, in part due to a change to the order from seven six-car sets to six seven-car rakes. So far two six-car sets which exclude the driving trailers have been delivered and the remaining coaches should be in service by the end of 2017.

Each seven-car set will have 217 second-class and 90 first-class seats. The sets include a coach equipped with a children's play area, a low-back seating area which RhB describes as a leisure area, and storage for bicycles and skis. There is also a photographic compartment with full-length electric-powered windows, which are the only windows that open on the air-conditioned trains.

RhB also has another 13 low-floor second-class driving trailers on order from Stadler which will enter service in 2018. They will be coupled to existing coaches to form trains powered by either locomotives or Allegra EMUs.

Interior of the photographic compartment.