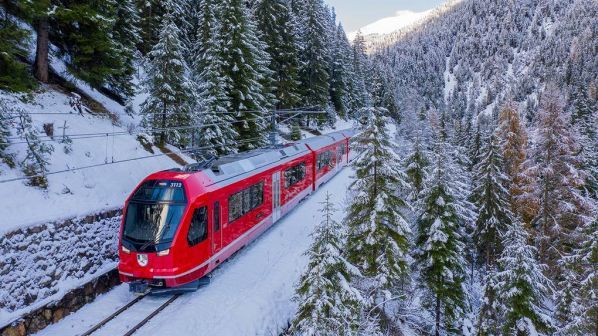 One of Rhaetian Railways' Stadler Capricorn trains running through the snowy landscape of the Grisons winter - ski season is a very busy time on the RhB network.
Photo Credit: Rhaetian Railway

SWITZERLAND’s metre gauge Rhaetian Railway (RhB) has announced a bid to run the longest passenger train in the world – comprising 100 vehicles with a total length of almost 2km – over the Albula Line from Preda to Thusis, which is a UNESCO World Heritage site

The date set for the record bid is October 29 and the train is to be made up of no fewer than 25 of the RhB’s newly introduced, Stadler-built, four-car Capricorn EMUs – a name inspired by the Alpine ibex wild goat which forms part of the crest of the Grisons  canton through which the RhB’s metre gauge mountain lines are the main rail network.

The world record attempt route is 24.9km long and descends 789.4m in height, with the journey expected to take around 46 minutes at a speed of 30-35km/h

The RhB placed its initial SFr 173m ($US 184m) order for 36 four-car Capricorn EMUs with Stadler in June 2016 – the biggest ever single procurement of rolling stock to be made by the company. The trains broke new ground for the RhB by being separable multiple units, meaning that on routes like the one from Landquart to the ski resort of Davos two four-car trains can be run in multiple and then be uncoupled at Klosters Platz station, with one portion running on to Davos and the other continuing to the exclusive resort of St Moritz in the Engadin valley.

An additional 20 Capricorn EMUs were ordered by RhB from Stadler in June 2020.

October’s world record attempt will consist of 25 of these four-car trains running in multiple over the Albula Line’s numerous viaducts, curved tunnels, spiral tunnels and mountainside galleries in the upper part of the valley. These were built in 1898-1903 to reduce the gradient over the 400m descent between Preda station at 1789m and Bergun station at 1372m from a direct distance of 5km to a more manageable incline by using a sinuous, loop-the-loop track which measures a total of 12km. The adjacent road in this part of the valley is so steep that in winter it is closed to traffic and used as a toboggan course, with the RhB trains ferrying people between the bottom and top parts of the course.

Also forming part of the route for the record attempt will be the section of line between Filisur, at 1080m in altitude, and the finishing point in the Upper Rhine valley at Thusis (697m). On this section the railway crosses the famous 65m-high Landwasser Viaduct – where a curved series of arches culminates with trains plunging directly into a tunnel in an overhanging cliff – and the 89m-high Solis Viaduct, which has the longest single arch on the RhB system, as well as negotiating a number of canyon-like ravines overlooked by ruined castles.

While the setting for the record bid is spectacular, there are also a number of technical challenges to be overcome – including ensuring the communication that will be needed between the seven drivers and 21 other staff manning the Capricorn trains.

RhB director, Mr Renato Fasciati, has revealed that the solution to the problem was found in the realm of civil protection, as a field telephone line almost 2km long is being installed to connect the various trains. For the record bid to work the 25 trains must be able to accelerate and decelerate at the same time – despite only four trains being able to be controlled from each driver’s cab. An electrical loop has been designed to ensure that the trains will brake at the same time, as the heavy weight of the train means that high forces will act on the infrastructure and carriage bodies if they don’t.

On the descent trains are fully braked using electrical recuperation and this produces electricity which is normally fed back into the public grid – so special measures will have to be taken during the record run to ensure that the voltage in the catenary doesn’t increase to too high a level from the 25 trains operating along it at once.

The special train will carry 4450 people including 150 invited guests – and the RhB wants the event to be marked as a holiday in the region so will be setting up a festival area for 3000 guests in the village of Bergun in the upper valley. Tickets were due to go on sale on August 2.

One of the drivers picked for the record bid, 45-year-old Mr Andreas Krame, has admitted to being slightly apprehensive but added that he was very excited about it as “you can only do something like this once in a lifetime”. Indeed, RhB managers told a press conference that if the weather turns out bad on the day there will be no possibility of postponing the attempt, simply due to the amount of preparation involved.