TESTING of Swiss Federal Railways’ (SBB) new fleet of RABEe 501 Giruno high-speed EMUs reached a milestone over the Easter weekend, when one of trains carried out a series of 275km/h runs in the Gotthard Base Tunnel. 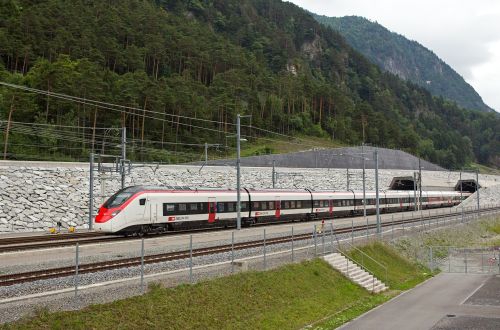 The overspeed tests are part of the authorisation process for operation of the Stadler trains at up to 250km/h on the Swiss main line network.

The test programme began following the rollout of the first train in May 2017, and five of the 11-car sets are currently being used for test runs in Switzerland and neighbouring countries. A sixth set is currently being prepared at Stadler’s commissioning centre at Erlen near St Gallen.

The fleet of 29 multi-system trains will be approved for operation in Italy, Germany and Austria, as well as Switzerland.

The trains will be introduced in December 2019 on services from Basle and Zürich to Milan via the Gotthard Base Tunnel.