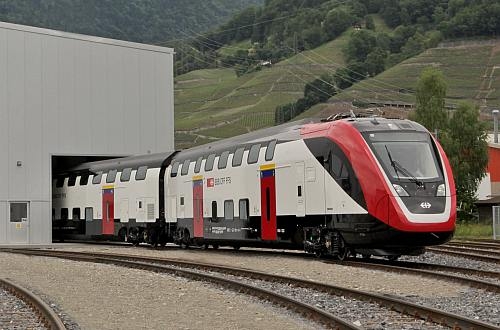 The SFr 1.86bn ($US 1.99bn) contract for 59 trains was signed in May 2010 and is SBB's largest-ever rolling stock procurement, as well as being the first ever order for tilting double-deck EMUs. Last November Bombardier agreed to supply three additional trains additional trains together with spare parts as compensation for late delivery, on the condition that the pre-series trains meet SBB's quality requirements.

Static testing of the second train is underway at a new purpose-built test hall at Villeneuve, while the first train is undergoing dynamic tests at the Velim test track in the Czech Republic, with trials on the Swiss network due to begin within the next few months. A total of seven pre-series trains will begin testing by the end of next year.

SBB says that the first two-pre-series trains meet the quality standards specified in its November 2014 agreement with Bombardier on the revised delivery schedule for the fleet, which will enter service from 2017 onwards. Delivery of the main batch of 59 sets is due to be completed by the end of 2019 and SBB is due to receive the three additional trains in the first quarter of 2020.

In addition to investment in new facilities at Villeneuve, Bombardier has upgraded its plant at Görlitz in eastern Germany to support Twindexx Express production.