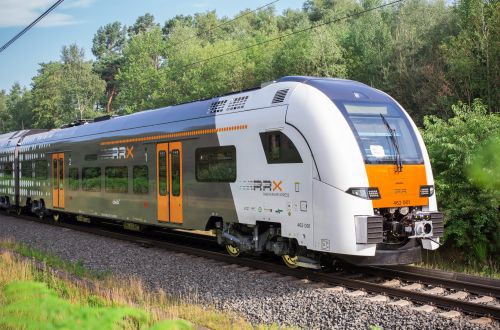 The RRX prototype at the Wegberg-Wildenrath test centre in Germany.

Seven pre-series trains will be commissioned at Wegberg-Wildenrath in the coming months before test running begins on the German rail network. RRX is scheduled to enter service in the Rhine-Ruhr area at the end of 2018.

Each four-car RRX, which is based on Siemens’ Desiro platform, consists of two single-deck motorised driving cars and two double-deck centre trailer coaches with seating capacity of 400 passengers including 36 in first class.

Each train has eight driven axles to produce an output of 4MW and a starting acceleration rate of 1.1m/s2. The air-suspension bogies are from Siemens’ SF100 and SF500 range.

The 160km/h trains will have a driver assistance system to aid braking and acceleration. They will have ethernet-based train control and train operator networks, CCTV, and what Siemens describes as an innovative infotainment system.

Each air-conditioned RRX is 105.25m long and 2.82m wide, and has LED lighting, Wi-Fi, electric power sockets throughout the train, and folding tables and reading lights in first-class.

Sensors combined with data communication will provide a continuous dialogue between the trains and the maintenance depot to enable predictive maintenance. Siemens says this will allow potential technical faults to be rectified before they occur. By taking on responsibility for lifecycle service and maintenance for the RRX fleet, Siemens says it can guarantee over 99% availability for scheduled operation.