SIEMENS has unveiled the new lighter weight 160km/h SF7000 bogies specifically designed for use under the new Desiro City emu. The SF7000 is Siemens' new standard for British 20m-long vehicles - 23m vehicles will still use SF5000. 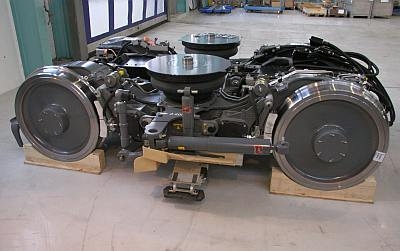 Development of Desiro City was authorised by the Siemens board in January 2007 at a cost of Euros 50m. Siemens was selected last year as preferred bidder to supply trains for Britain's Thameslink project, but development of the new bogies and other design and prototype work is being funded internally at present, as the contract has not yet been finalised.
The Desiro City is designed to be 25% lighter than the existing Desiro UK range - the new bogie design contributes significantly to this and the bogies are 35% (trailer SF7000 at 4.4 tonnes) and 32% (motor SF7000 at 6.3 tonnes) lighter than the earlier SF5000 (which are 6.8 tonnes and 9.3 tonnes respectively) giving the Desiro City a design axleload of 14.5 tonnes for trailer vehicles and 15.5 tonnes for powered vehicles.

The new SF7000 bogie is designed to reduce track wear on a 1000m-radius curve by up to 75%, compared with the SF5000. By reducing track wear and train weight lower variable track access charges will be payable by operators using the bogies.

The need to reduce weight and to reduce whole life-cycle costs has prompted a number of major bogie design changes. These include the use of an inboard bearing design rather than traditional external bogie frame with a shorter axle spacing. In addition, smaller diameter wheels and hollow axles are used. Other components have been redesigned to use less weight. For example, the weight of the yaw damper mounting bracket has been reduced from 22.7kg to 17.9kg but doubled in stiffness by using tempered steel castings.

Tread brakes are used alongside regenerative electric brakes on SF7000 motor bogies to reduce weight within the space constraints imposed by the restrictive British loading gauge, which makes disc brakes harder to accommodate.

In total 2280 SF7000 bogies will be required for the Thameslink order - split equally between powered and unpowered. Once the order is finalised, Siemens will produce the bogies using the "synchronised assembly" method at its plant in Graz, Austria, with a completed bogie rolling off the production line every four hours between March 2013 until 2016.

Production of the SF7000 will represent 22-26% of the Graz plant's workload and around a fifth of the initial assembly production space will be dedicated to the order.