RHINE-Ruhr Transport Authority (VRR) announced on February 10 that it has selected Siemens as preferred bidder for a contract to supply 82 EMUs for the Rhine-Ruhr Express (RRX) network and maintain the fleet for 30 years. 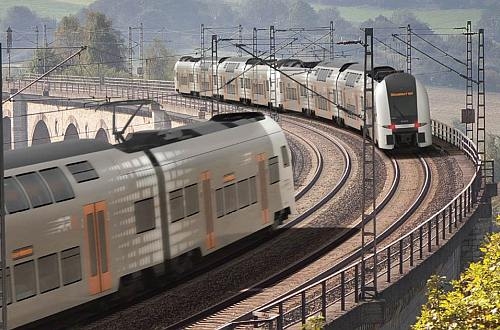 VRR says Siemens made a better economic offer than its two competitors in the tender, Stadler and a consortium of Alstom and Škoda. The total value of the order is estimated to be around €900m.

The 160km/h four-car trains will be based on Siemens' Desiro High-Capacity (HC) product platform, which combines single-deck driving cars with double-deck intermediate vehicles. According to Siemens, a 105m-long four-car Desiro HC set with two double-deck cars will seat up to 420 passengers.

The first trains are due to enter service in time for the launch of the RRX concession in December 2018. According to the tender, 71 trains will be required to operate the full timetable with the remaining sets covering maintenance.

The five-line RRX network is intended to bring a consistently high-quality fast regional rail service to Germany's most densely-populated region, with trains running at 15-minute intervals on the core Dortmund – Cologne line.

VRR says the transport authorities decided to procure rolling stock directly, rather than through the operating concessionaire, because this will result in lower life-cycle costs and a standardised fleet.

DB Regio opposed this structure and launched a legal challenge against VRR, which was rejected by a court in Münster last October.