SIEMENS and Sinara celebrated the fifth anniversary of their Ural Locomotives Russian joint venture on July 9 by signing a memorandum of understanding (MoU) which will pave the way for the assembly of high-speed trains at its Verkhnaya Pyshma plant near Yekaterinburg. 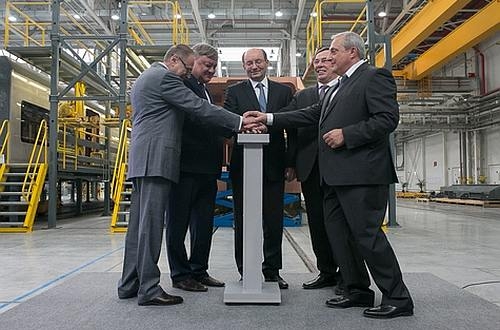 Under the agreement Ural Locomotives will be responsible for assembling any future orders for Sapsan vehicles for Russian Railways (RZD).

"Over the past five years Ural Locomotives has become synonymous with advanced technology and progress," says Dr Dietrich Müller, Siemens president and CEO for Russia and Central Asia. "I am sure that this MoU will be a starting point for our co-operation in the field of high-speed trains."

Last month RZD vice-president Mr Alexander Misharin confirmed that Sapsan services between Moscow and St Petersburg would operate at hourly intervals from October, increasing from seven to 15 trains per day. RZD has introduced Talgo trains on the Moscow - Nizhny Novgorod line in order to concentrate the entire fleet of 16 Sapsan sets on the St Petersburg route, but Misharin has indicated that additional vehicles may be required to meet forecast demand. All of the existing Sapsan trains were built at Siemens' Krefeld plant in Germany.

Also on July 9 Ural Locomotives officially launched production of the ES2G Lastochka Premium, a variant of the Lastochka regional trains already in service with RZD which will be configured to operate services covering distance of more than 200km. Assembly of Lastochkas will continue at Verkhnaya Pyshma until 2023 with increasing levels of local content in the production of these trains.