THE saga surrounding Fyra cross-border services between the Netherlands and Belgium took another twist on May 31, when Belgian National Railways (SNCB) announced it had cancelled its order for V250 high-speed trains with AnsaldoBreda. 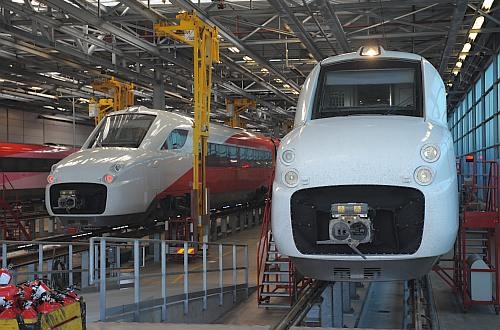 In a statement, SNCB said: "The design of the V250 train has fundamental shortcomings with potentially serious effects with regards to both safety and reliability. Also the quality management of the construction of the train is inadequate. Under these circumstances, SNCB can only respond by cancelling its order for the V250 sets."

The trains were originally due to be delivered in 2007, and eventually entered commercial service between Amsterdam and Brussels on December 9 2012. However just a few weeks later on January 17 the trains were withdrawn after it had been discovered that accumulations of snow had dislodged underfloor components, causing them to fall onto the track. At this point both SNCB and Netherlands Railways (NS) gave AnsaldoBreda three months to resolve the technical problems and bring the trains up to the quality standards specified in the contract. SNCB warned AnsaldoBreda that if it did not meet this deadline it would cancel the contract entirely.

Last week SNCB CEO Mr Marc Descheemaeker presented a long list of problems with the V250s, including safety-related issues such as overheating battery packs, loose roof-mounted components, and corrosion on wheelsets and bogies. SNCB says it is no longer confident that the problems it has identified will be resolved, or that the trains will meet the required standards.

SNCB and NS have jointly commissioned Mott MacDonald to carry out a report into the commissioning of the V250 fleet. This report suggests that solving fundamental problems will require considerable additional investment and will could take between 17 months and two years to rectify.

SNCB has also commissioned another consultancy, Concept Risk, France, to scrutinise the technical liability of the V250. Concept Risk expressed serious doubts about the design and construction of the train, including maintenance costs and the performance of the braking system.

Furthermore, SNCB is concerned about the financial position of AnsaldoBreda's parent company Finmeccanica, which it argues could have long-term implications for the supply of spare parts for the V250 fleet.

SNCB has therefore decided to cancel its order for three trains and revoke the bank guarantees on the preliminary payments, which are worth €37m. It is also preparing a legal claim for damages from AnsaldoBreda.

The manufacturer has responded by saying it does not agree with SNCB's decision or the conclusions of the research. The company says it is determined to retain the contract, together with the much larger contract for 16 trains with NS, which has yet to make a formal decision on how to proceed. This means it is very likely that AnsaldoBreda and SNCB will meet in court in the near future.

The Dutch V250s were ordered by NS Financial Services, the Dublin-based leasing subsidiary of NS.

The cancelation of the V250 order has major implications for the High-Speed Alliance, the joint venture between NS (90%) and KLM (10%) which holds the contract to operate Fyra services jointly with SNCB.

A decision is expected to be made on the future of the Dutch V250 order by June 20.

Meanwhile a solution still has to be found for the operation of cross-border services between Amsterdam and Brussels. Since March a two-hourly service has operated between The Hague and Brussels, using Bombardier Traxx multi-system locomotives leased by SNCB and Dutch ICRm coaching stock. These trains operate on the conventional network, crossing the border at Roosendaal.

Following the cancellation of the V250 order, SNCB will reopen discussions with NS on the future of train services between Belgium and the Netherlands. The aim is to reinstate an hourly service, but the first step will be to increase the frequency to 10 trains per direction per day from September, followed by further increase in frequency in December. As a shareholder in Thalys, SNCB will urge stepping up Amsterdam – Brussels – Paris high-speed services, and likewise, as a shareholder in Eurostar it will make the case for extending London – Brussels trains to Amsterdam, although this is unlikely to happen before 2016. In addition, SNCB has revived plans for conventional cross-border services from Antwerp to Eindhoven.