A unique solar-powered railcar built by the workshops of the Kismaros – Királyrét narrow-gauge line near Budapest has been granted approval to carry passengers in time for the start of the tourist season. 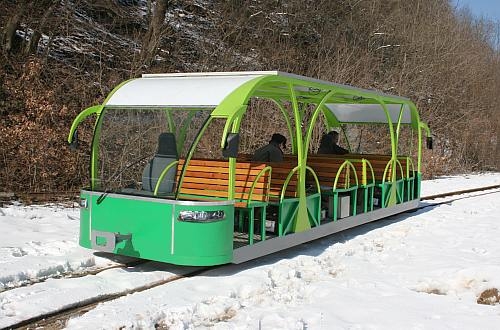 The 760mm-gauge vehicle, dubbed Vili, is fitted with a bank of photovoltaic panels, which are mounted on the roof and cover an area of 9.9m2. The panels feed batteries installed under the seats which are are also fed by a regenerative braking system. This means Vili can be operated exclusively using onboard solar power, although the batteries can also be charged from external power sources, which may also be fed by local solar cells.

The vehicle has a maximum speed of 25km/h and is driven by two 7kW microprocessor-controlled asynchronous electric motors, which are mounted on each of the two axles. Differential gears built into the axles not only reduce the rotation of the wheel discs on the inner rail, thereby reducing friction, energy use, and wear-and-tear, but also enable the two adjoining half-axles to pivot out from the imaginary axle line. This means Vili is ideal for narrow-gauge lines with curves as tight as 50m radius.

The mechanical parts of the railcar were developed by Hungarian company Börzsöny 2020, which maintains the Királyrét line's locomotive fleet, while the electrical systems came from Hungarotrain, an offshoot of the former Ganz Villamossági Művek (later Ganz-Ansaldo), which predominantly used local materials and know-how to develop the technology.

No external financing was used in the development of Vili, although environmental grants could be sought if further vehicles are produced for other customers.