THE first of two Kiss double-deck EMUs built by Stadler for Russian airport rail link operator Aeroexpress has been offering demonstration rides on the Shcherbinka test track near Moscow at the Expo 1520 exhibition. 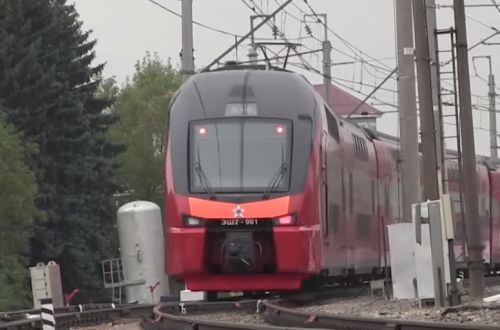 Stadler demonstrates its Kiss EMU for Aeroexpress on the Shcherbinka test track at Expo 1520.

Stadler was awarded a €381m contract to supply nine six-car and 16 four-car Kiss trains, which were due to be introduced on services linking central Moscow with the city's three main airports by the end of May 2015.

However, due to the recent changes in the world economy and their impact on the operation of Aeroexpress, Stadler and Aeroexpress say they are now renegotiating the terms of the original contract, including the financing and delivery schedule, which will determine when the first trains can enter service.

The first two EMUs have been undergoing technical examination and dynamic testing in Russia since last November. The certification process is not expected to be completed until the negotiations between the two companies have been finalised, enabling the trains to operate in the Russian Federation as well as in CIS countries.

In the meantime, Stadler diverted another two trains destined for Aeroexpress to Azerbaijan Railways (ADY) for operation between Baku and Korogulu during the European Games, which were hosted in Baku this summer. Stadler has a €70m contract from ADY to supply five Kiss double-deck EMUs, and the remaining trains will be delivered by January 2016. All five sets will be used on the 43km Baku - Sumgayit line, which is currently being upgraded.