STADLER handed over the first bi-mode Flirt multiple unit at its plant in Bussnang, Switzerland, on June 15. The train, which is equipped with a 3 kV dc drive for electrified lines and a diesel-electric drive for non-electrified lines, is destined for the Valle d’Aosta region in Italy. 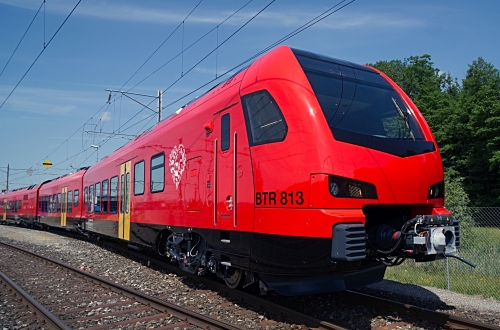 Five of the vehicles, which have a maximum axleload of 18 tonnes, were ordered for the Valle d’Aosta region in May 2015. Development and construction of the vehicles took just over two years.

The unveiling was attended by Dr Pierluigi Marquis, president of the Valle d’Aosta regional council, and Mr Peter Jenelten, vice-president of marketing and sales at Stadler.

The bi-mode Flirt is equipped with an accessible power module, which houses the two Deutz V8 diesel engines, the fuel tank, and additional drive equipment. The 66.8m-long train has a maximum speed of 160km/h under electric power and 140km/h in diesel mode.

The first train will begin commercial operations on the Aosta - Turin line in May 2018.