TRANSPORT for London (TfL) unveiled the first of 54 new class 710 Aventra EMUs being supplied by Bombardier on June 20, which will replace the current diesel trains on London’s Overground network. 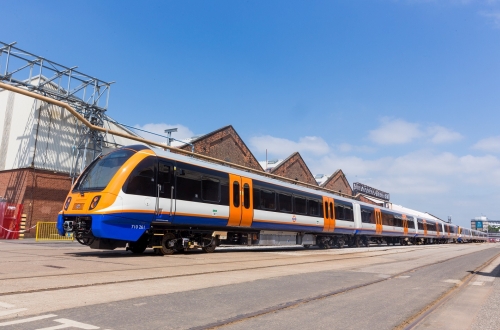 Bombardier's 710 will double the capacity of the London Overground's current fleet.

The first eight four-car trains will be introduced on the newly-electrified Gospel Oak to Barking line by November, replacing the existing two-car DMUs and doubling capacity on the route.

They will then be introduced on the London Euston/Watford route and on services out of London Liverpool Street to Cheshunt, Chingford and Enfield Town, replacing the current fleet that TfL inherited when it took over the suburban routes from Abellio Greater Anglia in 2015, some of which are more than 35 years old. The new trains will also be used on the extension to Barking Riverside when it is completed in 2021.

The new EMUs will double the capacity of the current class 172 DMUs to almost 700 passengers per train and feature walk-through carriages for greater capacity and improved accessibility, with more wheelchair spaces.

The trains are being built at Bombardier’s plant in Derby, Britain, and will be operated by Arriva Rail London (ARL), which has a seven and a half year concession agreement with TfL. The trains will debut a new livery and unique seat moquette. TfL says the trains are constructed from strong but lightweight materials, making them more energy efficient to operate.

Final approval of the work carried out by Network Rail to electrify the Gospel Oak - Barking line was completed last week, and the new trains will now be tested on the new infrastructure over the summer to prove they meet TfL’s safety and reliability requirements.

A simulator has been built to enable drivers to experience driving the new trains along the route in all conditions, including severe weather and trespassers on the track.