A project to introduce a new common design of train on the Tokyo metro and Tobu Railway reached a milestone at the end of February when Tobu Railway received its first 70000 series EMU from Kinki Sharyo. 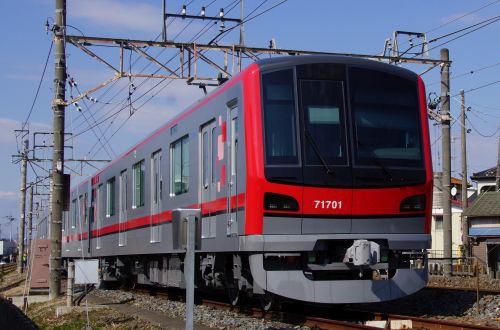 The seven-car trains will be used on inter-running services on the Tobu Skytree Line and the Tokyo Metro Hibiya Line alongside Tokyo Metro’s fleet of 13000 series trains, which are currently being delivered by Kinki Sharyo. The two fleets share common specifications for major equipment and the car bodies.

The internal layout is also standardised. The trains have 460mm-wide seats, compared with 450mm on Tobu series 20000 trains and 430mm on Tokyo Metro’s series 03 trains.

Passenger information displays with 17in LCD screens are installed above the doors and the trains are equipped with LED lighting.