TRANSMASHHOLDING (TMH) has unveiled a prototype EMU, the EP2D, developed by its Demikhovsky Engineering Plant subsidiary, and will soon undergo dynamic tests at the Railway Research Institute (VNIIZHT) test track in Shcherbinka, near Moscow. 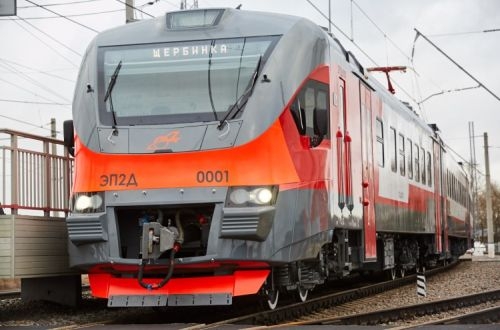 The train was designed to meet the requirements of TMH's largest prospective customer, Russian Railways (RZD) subsidiary Central Suburban Passenger Company, while also conforming to the technical regulations of the customs union of Russia, Belarus, Kazakhstan, Kyrgyzstan, and Armenia. The EMU will be available in four to 11 car configurations, allowing operation on low-density routes and busy commuter services with the 11-car version able to accommodate up to 2866 passengers. A diesel-electric variant is also available.

TMH says significant emphasis was placed during development on the train's aesthetics and the comfort. New seats and luggage racks were designed specifically for the train while it incorporates passenger information displays, and a climate control system. The train's windows are fitted without seals, which reduces the time for replacement at depots.

The new train is almost entirely manufactured in Russia, with localisation of components currently 90% and TMH stating that this will reach nearly 100% in 2016.