CAF started testing the first of 13 sets of Mk5A coaches for British operator TransPennine Express at the VUZ Velim test circuit in the Czech Republic on March 21. 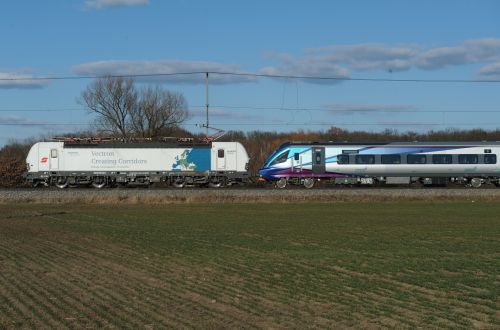 The five-coach set was transported from Spain by ship to the German port of Bremerhaven and forwarded by rail to Velim, where it arrived on March 11.

The coaches, which were ordered in May 2016, will operate in push-pull mode with class 68 diesel locomotives provided by Direct Rail Services (DRS). Two of the Vossloh/Stadler Rail locomotives were due to be transferred from Britain to the Czech Republic for testing with the new coaches last month. However, the locomotives were turned back before reaching the Channel Tunnel due to paperwork issues in France.

A multisystem Siemens Vectron electric locomotive is therefore being used for testing at Velim, although two class 68s were despatched from the DRS depot at Crewe on March 21 and are expected to arrive in the Czech Republic in the coming days.

The train completed its first circuit of the test track on the afternoon of March 21, initially operating at a maximum of 60km/h. The train later reached its maximum speed of 200km/h on the large test ring.

The Mk5As are not the only CAF vehicles for Britain currently at Velim. A class 195 Civity DMU for Northern arrived at the facility recently for an extensive programme of tests encompassing both customer requirements and the Authorisation to Place in Service (APS) required for commercial operation.