THE first set of CAF Mk5A coaches for British operator TransPennine Express (TPE) was unveiled to the media at the Velim test centre in the Czech Republic on April 12. 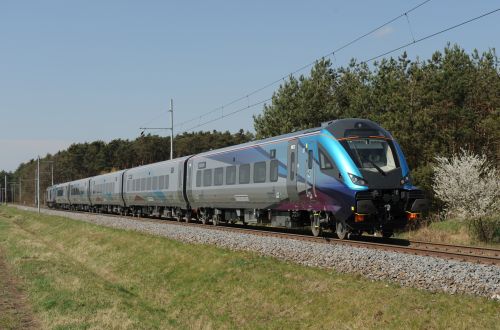 The fleet of 13 five-car sets will operate in push-pull mode with Vossloh/Stadler Rail Valencia class 68 locomotives sub-leased from Direct Rail Services. Two class 68s have been dispatched to Velim for testing with the new coaches, which have been dubbed ‘Nova 3’ by TPE.

The set will remain at Velim until the end of May for functional type testing before transfer to Britain.

Two class 68 locomotives have been sent to Velim for testing with the Mk5A coaches. Photo: Quintus Vosman

The trains are is due to enter service at the end of the year and the fleet will cover 12 diagrams a day. Sixteen class 68s are being modified to operate with the Mk5As and 14 will be required by TPE with DRS retaining two for other duties. CAF is supplying a 14th driving trailer (DT) to act as a spare vehicle for the fleet.

The trains will be deployed on Liverpool/Manchester Airport - Scarborough/Middlesbrough services and all 13 sets are due to be in traffic by January.

The Nova 3 Mk5As have been designed to comply with European Technical Specifications for Interoperability (TSIs), with exemptions where necessary for authorisation and operation on the British network.

Coaches are coupled with a semi-permanent rigid bar, with conventional couplings and buffers on the outer vehicles to enable operation with locomotives. The maximum speed is 160km/h, although it will be possible to modify the vehicles for 200km/h operation if required in the future.

Each train is formed of three types of coaches (DT+T2+T3+T3+T1+locomotive). Intermediate coaches are 22.2m long, while the DT is 22.37m-long, making the total length of the formation 131.84m (including the locomotive).

The driving trailer and T2/T3 coaches seat a total of 310 passengers in second class accommodation. The first class T1 vehicle seats 30 with two wheelchair spaces, a kitchen and a TSI-PRM-compliant toilet.

An at-seat meal service will be provided in first class, with trolley catering in second class. Load factors will be monitored by a passenger counting system in each vehicle.

Door operation is determined by Automatic Selective Door Opening (ASDO) based on GPS positioning, supported, if necessary, by beacons on the track. A sensor system has been built into the door units to detect obstructions when the doors are closing.

The Mk5A order is being financed by Beacon Rail Leasing, which also owns the class 68 diesel locomotives being sub-leased to TPE.

In addition to the Mk5As, TPE has ordered two other new train fleets.

Testing of the first of 12 CAF class 397 Civity UK inter-city EMUs (Nova 2) for Manchester/Liverpool – Glasgow/Edinburgh services is due to start at the end of April. Most static testing will be carried out at the plant in Spain before the train moves to Velim, where dynamic testing will begin in June.

Hitachi is supplying 19 bi-mode class 802 (Nova 1) trains, which will supersede the Nova 3 sets on Liverpool - Newcastle services. Production of the first five-car trains is underway at Hitachi’s Kasado plant in Japan, and the first two sets are due to arrive in Britain in August. Seven trains will be built at Japan, with assembly of the remaining 12 sets taking place at Hitachi plants in Europe.