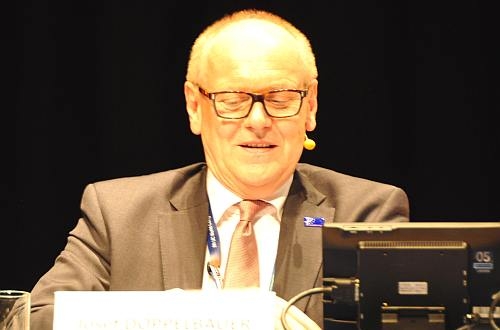 Doppelbauer argued that fragmentation is one of the greatest challenges facing the rail industry and warned that convergence will be necessary if ERTMS is ever to achieve its original purpose. "We have replaced around 20 national signalling systems in Europe with 50 non-interoperable dialects of ERTMS, something we should not be very proud of," he says.

ERA has committed to delivering the specification of Baseline 3 release 2 this year and to agreeing a strategic roadmap for ERTMS specifications by the of 2015.

"We need discipline - the specifications for ERTMS must be enforced," Doppelbauer says. "Based on a stable specification, the supply industry must commit to full implementation for the on-board system. Regarding notified bodies (NoBo), there must be strict EC conformity and verification certificates based on a common approach for verification. For national safety authorities, authorisation must be on the basis of the NoBo's declaration and ERA's opinion."

Doppelbauer also emphasised that rail is at a huge disadvantage compared with other modes of transport in terms of its ability to develop base technologies. Rail will invest around €50bn in rolling stock between 2014 and 2019 corresponding to about 5000-10,000 new trains a year. By comparison the annual production of cars is around 80 million units.

In aviation there are only two main families of short-to-medium range single aisle airliners: the Boeing 737 with around 4000 planes in service and the Airbus 320 with about 3000 units in operation. By comparison, there are seven types of TGV in service in France alone, including single and double-deck, with a fleet of 550 trains, while in Japan the Shinkansen family comprises approximately 600 trains.

"In term of basic technologies, rail depends on innovations and developments in other sectors," Doppelbauer told the conference. "No single railway system integrator can master the next technology jump, for example to the digital railway, on its own."