TWO ETCS balises were ceremonially installed at Airolo on the Gotthard line on Friday 13, marking the start of a five-and-a-half year programme to install balises at 11,000 locations covering the entire Swiss mainline network. 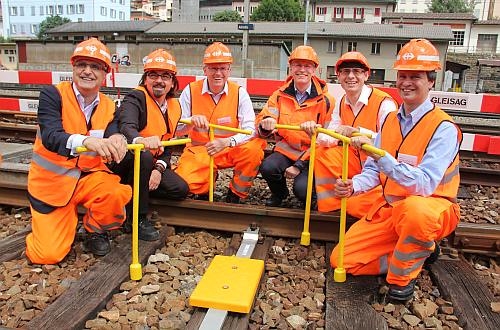 The balises were installed by representatives of Swiss Federal Railways, the Swiss Federal Office of Transport (BAV) and their partners Siemens and Thales.

SBB and BAV are investing around SFr 300m ($US 307m) in the project with the aim of rolling out ETCS Level 2 across the whole network by 2025, allowing headways of two minutes for trains travelling at 200km/h.

BAV has been preparing for this stage since 2000, when it initiated its strategy for introducing ETCS in Switzerland and appointed SBB as project leader. ETCS technology was initially installed on the new high-speed line between Mattstetten and Rothrist, and then on the Lötschberg base tunnel.