A NEW control centre for the Gauteng area has been commissioned by Siemens for the Passenger Rail Agency of South Africa (Prasa) and will start to control trains in January. 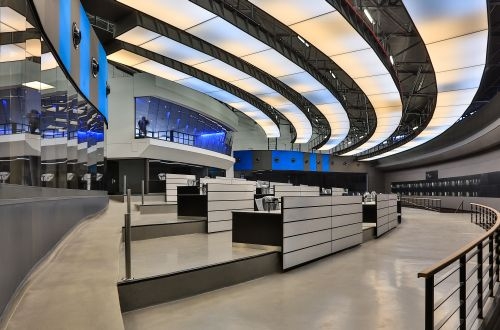 The Gauteng Nerve Centre (GNC) will monitor the operation of more than 600 trains in the Johannesburg and Pretoria area and will effectively consolidate 35 existing control centres into one location.

The GNC covers 3400m2 and has a 52m-wide 2m-high video wall which will display train movements, traction power supply, the latest weather, and other operational data.

Train movements are controlled from 30 multi-screen workstations equipped with an integrated communications system which combines telephone, radio and GSM-R. The GNC also controls passenger information and CCTV in stations, as well as monitoring overhead electrification equipment.

Siemens won a contract in 2011 to replace about 25% of the signalling equipment in the Gauteng area, some of which dates back to the 1930s, and Prasa awarded Siemens a follow-on contract in 2013 to replace the remaining 75%. So far, three of the 92 stations in the area have been equipped with modern interlockings. When the entire project is completed in 2017 it will be possible to reduce train headways from 15 minutes to just 2.5 minutes.