A new system which enables passenger train interiors to be reconfigured to carry freight is ready for trials, according to its developer. 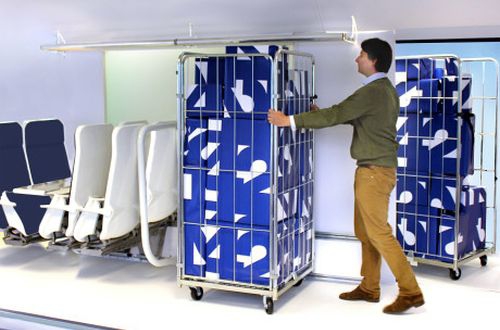 The Adaptable Carriage system developed by 42 Technology, Britain, allows seats and tables to be automatically stowed to create space for low-density high-value packages.

The system was developed in consultation with Britain’s railway industry as part of a two-year programme funded by the Rail Safety and Standards Board (RSSB).

Adaptable Carriage features a forward-folding seat design, which enables easier cleaning after seats have been stowed. A sliding mechanism is used to configure the seats for passenger use and lock them in position.

Seats and mechanisms have been engineered to minimise weight. All seats, tables and draft screens within each section are linked together and can be moved along the length of the vehicle. The control system secures all seats in both passenger and freight modes.

Reconfiguration is fully automated and the process is completed in less than three minutes. This means 20 rows of seats can be compressed to create a space equivalent to the capacity of an articulated lorry trailer.

According to 42 Technology the system can be installed in both aluminium and steel-bodied vehicles and is suitable for both retrofit and new-build applications. The company says it is working with a number of interested parties on initial trials and to enable further development of the technology.

A working demonstration module will be on show at the Railtex exhibition at the National Exhibition Centre in Birmingham on May 9-11.