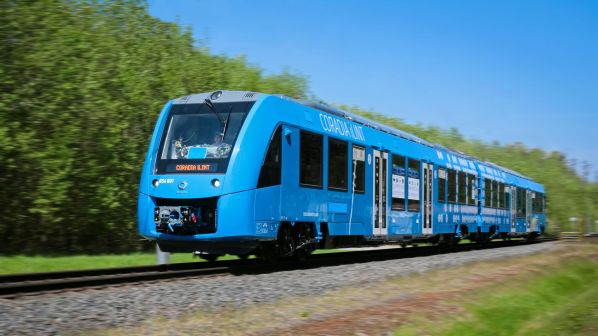 The presentation was made during a virtual event on January 25 hosted by Mr Alberto Mazzola, executive director of the Community of European Railway and Infrastructure Companies (CER), and Mr Philippe Citroën, director general of the European Railway Industry Association (Unife).

The Coradia iLint project is the first commercial application of hydrogen fuel-cell powered trains and follows an extensive testing programme. Alstom is building a fleet of 14 trains with a range of 1000km which will enter service in 2022, replacing conventional DMUs.

“It is not typical that a public transport authority initiates and accompanies a technological development of this scope,” Schwabl says. “However, innovation is a break with the typical to create something ground-breaking. With our partners, during the test phase, we achieved a real world premiere in passenger service - right here in Lower Saxony. We were very surprised in the huge interest in our project from around the world.”

Schwabl says the trains performed well during the test phase. The trains will only need to be refuelled once during the day. They are also very quiet and emit the same level of noise as an electric train.

Two special accolades were also presented during the event. The outstanding political contributor accolade went to Mr David Sassoli, president of the European Parliament, for his leading role in steering the Fourth Railway Package through the parliament. The outstanding citizen’s initiative accolade was given to Mr Martin Speer and Mr Vincent-Immanuel Herr for their Free Interrail pass movement which led to the launch of DiscoverEU for 18-year-olds to travel for one month free-of-charge by rail throughout the European Union.