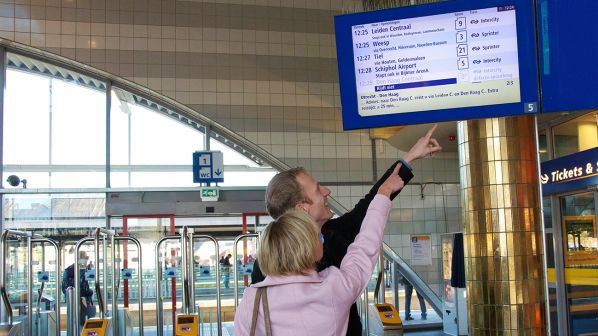 NETHERLANDS Railways (NS) has announced plans to upgrade the 20-year-old InfoPlus passenger information system, one of the Netherlands’ largest IT systems in the country, which provides travel information for all passenger operators at all stations across the country.

NS is set to gain responsibility for the system from national infrastructure manager Prorail. The upgraded platform is expected to be completed by the end of the year.

While there will be minimal changes to the screens themselves, NS says the quality and timeliness of information provided should improve significantly. The new InfoPlus system will be more responsive to actual events. For example, if a train’s route is extended or shortened during operation, this will be reflected on the screens and through automatic announcements.

“If a train is delayed, another train may arrive at the platform earlier,” says Mr Tim van Leeuwen, head of travel management at NS. “We are currently processing these changes manually. This can sometimes go wrong, for example due to heavy traffic. In the future, the travel information system will be able to implement these changes automatically, so that the correct train is displayed on the board.”

This will also apply to smaller stations, which were previously excluded. In the event of disruption, the system will automatically announce alternative routes to key destinations where possible.

Planned timetable adjustments can also quickly be displayed, which could have taken weeks with the previous system. As part of the upgrade, the automatic station broadcasting system will be updated and will provide automatic broadcasts in several languages in addition to Dutch.

The new system will offer substantially more automation, removing or changing the jobs of more than 60 employees. This will not result in forced redundancies after NS entered into a new collective labour agreement with its unions in February 2021, which guaranteed employment for all staff until January 2025.