SPANISH companies involved in the development and certification of the OGI automatic gauge-changing system have completed the first phase of dynamic testing. The OGI bogies are designed for use on freight routes crossing the Spanish-French border where the track gauge changes from 1668mm to 1435mm. 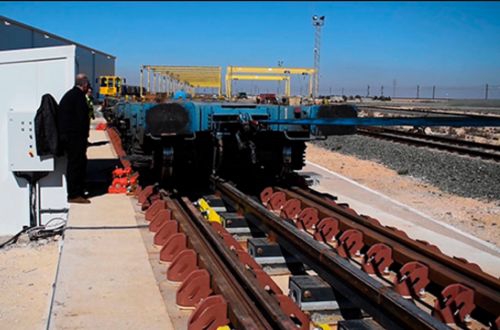 Following the rules set by the national technical specification (ETH), the system was subjected to 500 consecutive gauge-changing test runs, at a maximum load, on the La Gineta test track in southeastern Spain. This facility is owned by Spain’s infrastructure manager Adif, which is leading the project. On a single day, more than 100 automatic gauge-changing operations between 1435mm and 1668mm were carried out, with no problems detected.

The OGI system is being certified for two types of flat wagon: a MMC3 container wagon with a maximum axleload of 22.5 tonnes and a wheel diameter of 920mm, and an LFT car transporter with 760mm-diameter wheels and a 16-tonne axleload.

Mainline dynamic testing of a minimum of 100,000km and at the wagons’ maximum permitted speed will now be carried out in Spain on both 1668mm-gauge conventional lines and 1435mm-gauge high-speed lines. Dynamic testing will then switch to the standard-gauge cross-border Barcelona - Perpignan line, which is the only mixed-traffic, high-speed line currently in operation in Spain.

The OGI system dates from the 1970s, but in 2014 Adif decided to lead a project to reengineer it and to adapt it to current rolling stock technical specifications. Companies involved in the certification project include OGI, AZVI, which owns open-access freight operator Tracción Rail, and Tria Railway, the sole manufacturer of gauge-change facilities used extensively in Spain.

As with the Talgo and CAF gauge-changing systems, the OGI bogies passively adapt their wheels to each track gauge when passing over a fixed infrastructure composed of rails and check rails which transition the wheels between the two gauges. The system can be installed easily at existing freight yards or stations.