THE autonomous tram trial in the German city of Potsdam has been expanded from the original 6km section of line in the city’s suburbs to 13km, extending all the way to the Line 96 terminus at Marie-Juchacz Strasse. 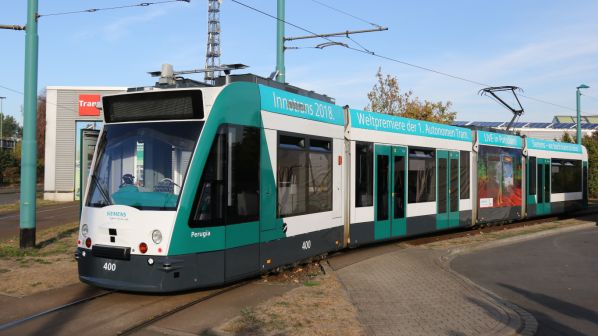 The route includes a roofed 800m section shared with buses, enabling a wider range of scenarios to be tested and measured.

New ‘experiences’ for the autonomous tram on the extended section include sharing roads with traffic and the system is being developed to enhance its ability to predict what how pedestrians and drivers of road vehicles might react.

The trials began last year and so far the converted Potsdam Transport (ViP) Siemens Combino LRV has operated without any significant incidents. The vehicle is always manned by an experienced driver who can intervene if required (Grade of Automation 3).

Siemens together with the Association of German Transport Companies (VDV) are working together to draft a safety and legal framework for the use of autonomous light rail vehicles as German (and European) law currently does not currently provide for such operation.

Siemens hopes to first be able to use autonomous driving technology in depots where it could reduce the requirement for drivers, and crucially for operators dealing with traffic surges such as sporting fixtures, it could enable additional trams to be made ready for use much more quickly.

Siemens has also sold some of the technology used for the autonomous tram in its ‘Tram Assistant’ package of software and sensor hardware (radar and cameras) fitted to Avenio trams being supplied to Ulm, Bremen and Copenhagen.

‘Tram Assistant’ is designed to prevent collisions with pedestrians and vehicles. Sixty Avenio LRVs previously supplied to The Hague will have the system retrofitted as will the older Combino fleet in Ulm. The system can be fitted to any Siemens-built tram.

Siemens is also working with German Rail (DB) to develop similar technology based upon radar, Lidar, sensors and the algorithms developed by Siemens in Potsdam for use on the heavy rail network. Initial trials using the DB Advanced Train Lab at up to 40km/h are planned within the next year.