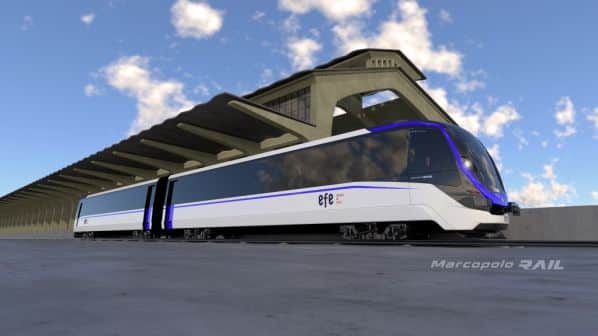 The DMUs are of the Prosper VLT type, which Marcopolo says can be supplied for urban, tourist or inter-city routes on 1000mm, 1435mm or 1676mm-gauge networks and with diesel, overhead electric or hybrid traction, with the possibility of hydrogen fuel cells in the future. The prototype Prosper VLT was unveiled in December 2020, after bus manufacturer Marcopolo had announced that it was moving into rolling stock production.

The tender calling for the supply of three DMUs for the Talca - Constitución route, to replace ageing two-car railbuses, was first announced in August 2019. Marcopolo Rail’s contract with EFE for the new trains includes spare parts and maintenance.

“The trains will be bi-directional, with a cab at each end,” says Marcopolo Rail executive manager, Mr Petras Amaral Santos. “The units will have capacity to carry 223 passengers, 80 seated and 143 standing. The units will have air-conditioning and spaces for people with reduced mobility, as well as a toilet.”

“The supply of trains to Chile will strengthen our performance and favour our entry into other Latin American markets,” Santos says.

Seats will have armrests as well as USB ports, with folding tables on the seat backs. The air-conditioning system will operate independently in each car.

Production is scheduled to begin in the first half of this year at the Marcopolo Rail factory  at Caxias do Sul in the state of Rio Grande do Sul.

The 88km Talca - Constitución route connects rural areas of Chile’s Central Valley with the coastal area of the Maule region. It traverses a region poorly served by other modes of public transport and includes the Banco de Arena bridge over the Maule River designed by renowned French civil engineer, Mr Gustave Eiffel.

The line was severely damaged by an 8.8-magnitude earthquake in 2010 and was at one point reported to be facing closure. A recent Pesos 1.57bn ($US 1.9m) infrastructure upgrade reduced the end-to-end journey time from 3h 15min to 2h 45min.