THE main line linking London, Plymouth and Penzance reopened today following repairs costing £35m to damage caused by major storms in February to the coastal section at Dawlish between Exeter and Plymouth. 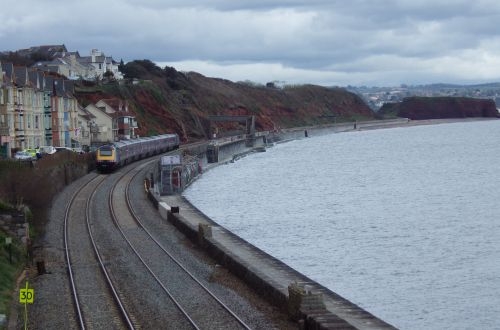 The first storm struck on the night of February 4/5 causing the seawall to collapse and creating an 80m-wide crater beneath the track. This was followed by a second storm on February 14/15 which extended the crater to a width of 100m and caused more breaches of the seawall and landslides along a 6km section of the line. On March 17 another landslide of 25,000 tonnes of sandstone occurred at Teignmouth further west.

Network Rail (NR) installed a line of 18 shipping containers filled with stone which were welded together to act as a temporary seawall during the repairs. These involved filling in the crater, replacing 700m of ballast and track, rebuilding half of Dawlish station, installing 21km of new cables, designing and installing a temporary signalling system, clearing hundreds of tonnes of debris and repairing dozens of sites along a 6.4km section.

Even though trains are running again, more work is needed to restore the signalling system, repair a parallel road to allow residents to return to their homes, remove the shipping containers, and rebuild the sea defences. Mr Tom Kirkham, NR's project manager, says the line will close again on April 26-27 to replace the signalling.

"Our army of engineers has done an amazing job of putting back together a railway that was ravaged by the elements," says Network Rail's CEO Mr Mark Carne. "They have overcome every obstacle thrown at them, winning many battles along the way to restore this critical piece of the network, ahead of schedule, and in time for the Easter holidays.

"Our focus now moves to the medium and long-term looking at what can be done at Dawlish to make the current coastal route more resilient and, by the autumn, understand what the best viable relief route might be."

A taskforce led by NR, and including the Department for Transport, operators, and local authorities, has been formed to assess three long-term options:

"We are going to look at relief lines as well as alternatives to the southwest," Carne told IRJ in Dawlish. "The work we have done has increased the resiliency of the line around Dawlish, but this has not changed our view that in the long-term we need to increase the reliability of railway services here. We also are looking at how to increase speeds to and from the southwest. To see if a new railway is the most viable way of achieving this, we are collecting ideas from various stakeholders and we will come back with proposals in a draft study that will be completed in June. A full study will then be presented to the government in the autumn.

"There are no plans for an alternative railway to the southwest in control period five [NR's five-year investment programme which started on April 1], so the plans we are looking to develop are likely to be included in control period six. If there is a resolution to do something in the next five years we would of course welcome it."

Mr Mark Hopwood, managing director of London - Penzance operator First Great Western, told IRJ that the two-month closure had "a big affect on revenue," but declined to put a figure on the loss. "A lot of customers stayed with us during the closure and used the replacement bus services on offer. We plan to change the timetable in December to allow more services from London to reach this part of the country earlier in the day and to provide earlier services from here to London. This will be supported by a new marketing campaign."

Work underway to rebuild the railway at Dawlish.