A ground breaking ceremony was held in California on November 29 for the $US 700m five-year first phase of the 40-year $US 6bn North Coast Corridor (NCC) infrastructure improvement project. 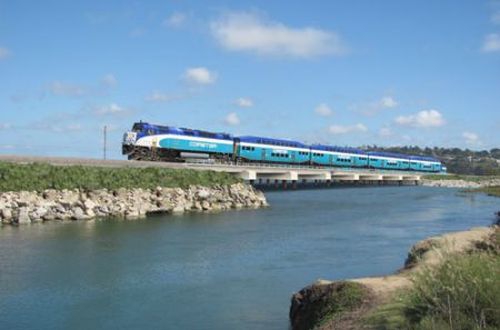 The NCC project includes highway, rail, environmental and coastal access projects to improve the quality of life for Southern California residents, create a stronger local and regional economy and enhance the coastal environment over the next 30 years.

The first phase, which is being funded by a combination of federal, state and regional revenue sources, focuses on highway, rail and bike, pedestrian and habitat improvements along the California coast between Oceanside and San Diego. The project calls for $US 480m in highway improvements, $US 40m in bike, pedestrian and community enhancements, and $US 80m to restore the San Elijo Lagoon.

However, improving the 96km southern section of the Los Angeles - San Diego main line is a central component of Build NCC and the rail improvements included in the NCC project are part of a 20-year plan to invest nearly $US 1bn in installing more double track on the single-track section between the Orange County border and San Diego.