GERMAN Rail (DB) has completed the first phase of upgrading the Berlin – Rostock main line, and from June 15 journey times will be cut from 2h 54min to 1h 59min by ICE. 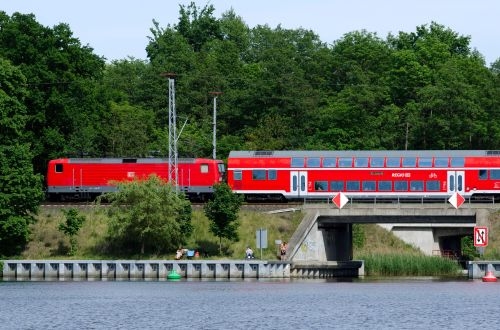 DB has invested €658m so far to increase the maximum speed to 160km/h and raise the maximum axleload to 25 tonnes which will benefit the increasing amount of freight traffic using the port of Rostock. The European Union has contributed €167m towards the total cost.

Track upgrading was carried out on 168km of the 198km section between Nassenheide and Rostock, which required the closure of both tracks due to the marshy ground conditions.

The second phase will cover the 7km section from Nassenheide to Oranienburg, north of Berlin, where the line speed will be increased to 160km/h from 2016, plus reconstruction of five stations which is not expected to be completed until 2021.