LONDON Underground's £11m project to enable 36 trains/hour/direction to operate on the Victoria Line for the first time - the highest frequency on the network - has reached the halfway point. 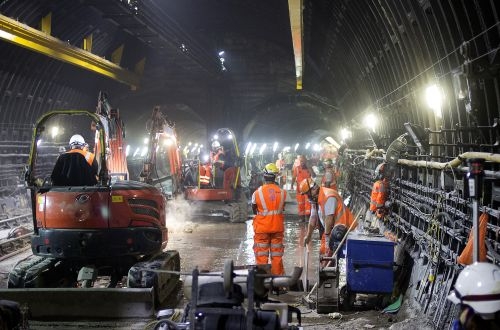 The Victoria Line has already been fitted with communications-based train control (CBTC) with ATO and a new fleet of trains which will permit 36 trains per hour, but the design of the crossovers at Walthamstow, the northern terminus of the line, will only allow 24 trains/hour, and around 32 trains/hour south of Seven Sisters.

The project involves replacing the 50-year-old crossovers and renewing the adjacent track and concrete base. So far the old concrete slab and track has been removed, and the new track and support system installed. Work to pump around 300m3 of concrete down a vent shaft and along a 500m pipe to secure the crossover in place starts on August 21. To enable the work to be carried out, the northern section of the Victoria Line between Seven Sisters and Walthamstow is being closed for 23 days and will reopen on August 30.

"The Victoria line now carries a record 200 million passengers each year and demand is rising," says Mr David Waboso, London Underground's capital programmes director. "This is one of the biggest single closures we've undertaken on the Tube network in over a decade. The outcome will enable us to deliver a 40% capacity boost for customers northeast of Seven Sisters. We've carefully timed our programme schedule down to the last hour and our engineers are working around the clock to keep the closure period as short as possible."